HomeNewsFish Forever NewsA letter from the Minister of Conservation

Read the Minister of Conservation, Maggie Barry's response to questions posed to her by Fish Forever regarding the establishment of marine reserves in the Bay of Islands... 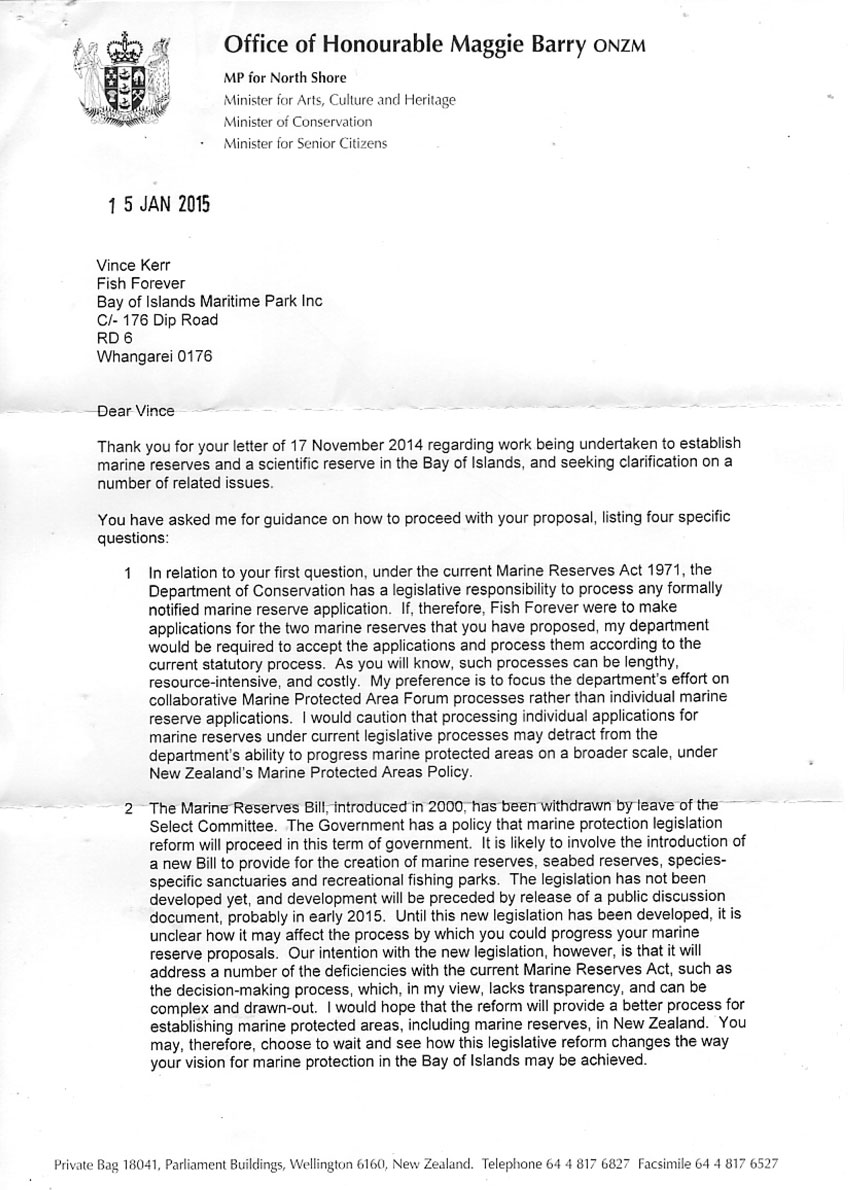 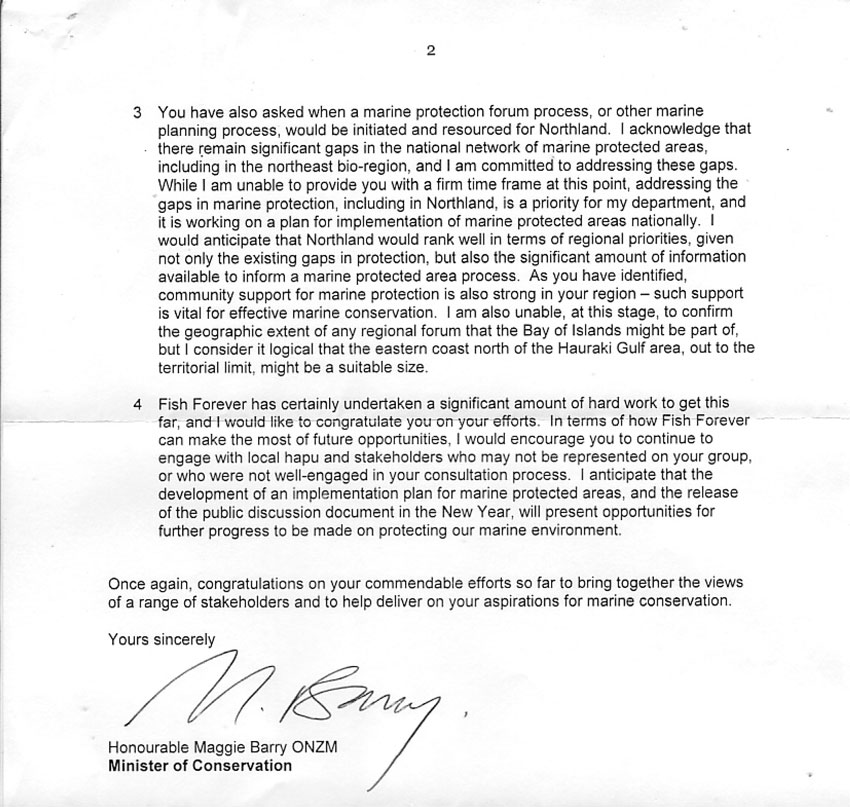 Fish Forever's letter to the minister:

We are writing to inform you of progress with our work to establish no-take marine reserves in the Bay of Islands, Northland. We also seek clarification on a number of issues regarding our work here in Northland.

Fish Forever is a community-based conservation group, working as part of the Bay of Islands Maritime Park Inc. Since 2010 we have been actively working with the Bay of Islands community and hapu, consulting on the creation of representative marine reserves and carrying out planning and technical work in support of them. In May this year we published a Community Consultation Document that attracted over 1,300 submissions. More recently we have published a report on the analysis of those submissions, which showed enormous support for our proposals. These and our other supporting documents can be downloaded from our website, www.fishforever.org.nz.

The result of our work over four years is that we are ready to move on with the creation of marine reserves in the Bay of Islands. Our consultation process demonstrated that our proposals are soundly based and that the community is solidly behind the concepts of a network of marine reserves and our specific proposals. It is clear that the Bay of Islands has been waiting for marine reserves since the 1986 proposals by the Ministry of Fisheries. There is great concern over decline of species and habitats in the Bay. We were especially impressed by the support shown by the business community and local government. There are clearly some significant economic incentives behind these proposals given the fabulous marine habitats involved and the Bay of Islands’ iconic status in the New Zealand tourism industry. And, of course, our proposed reserves would fit well with the roll-out of your MPA Policy.

In stark contrast to the broad support from the community, we have not retained support from the two local hapu, Ngati Kuta and Patukeha based at Rawhiti, despite years of engagement. For two years we were working positively with the hapu representatives via a partnership working group, with the aim of a joint application for marine reserves. There was considerable support for these reserves from many individuals in the hapu. However in the last 12 months the leadership of the hapu has changed and they now appear to be totally focused on their Treaty grievances and cultural redress. As such, they have ceased working with us and have stated that marine reserves are not consistent with or supportive of their Treaty claims for mana moana. We understand that we continue to have support for the marine reserve proposals from individuals within the hapu and we hope that the current position may change in the future. But for now, we are unable to make progress in obtaining formal support from the hapu.

It could be argued that the overwhelming support from the wider community gives us a clear mandate to move forward with the proposals, even in the face of opposition from the hapu. If we proceed we would continue to engage in good faith with the hapu throughout any application for the establishment of the marine reserves, and to support them to be recognised as kaitiaki of the marine reserves.

We do not consider the hapu’s current position to be justification for not making an application for marine reserves under the Marine Reserves Act 1971.

In conclusion, we are asking for some guidance on how to proceed with our proposal. Specifically we are asking of you and the Government the following questions:

1. How would an application under the Marine Reserves Act 1971 (based on our Community Consultation Document and the dynamics discussed above) be received and processed by the Government? (We could be ready to proceed within two months.)

2. What is the status of the Marine Protection Bill, when is it planned to come into effect, and what changes would this proposed legislation bring to how we proceed?

3. Under the proposed Marine Protection Bill and Government’s MPA Policy can you give an indication of when a marine protection forum process or other marine planning process would be initiated and resourced for Northland as a sub-region of the Northeast Bioregion?

4. In relation to question 3, we are interested in hearing how you think we can make the most of the future opportunities.

We will appreciate your consideration of these matters and are happy to be contacted by you or your staff for any questions or further information. Likewise if you feel a face-to-face meeting is warranted to discuss these issues, we would be keen to do that.