Have you been wondering what’s happening with Fish Forever and its campaign for no-take marine reserves in the Bay of Islands?

In fact, lots has been going on - but not much of it headline-grabbing.

The Consultation Document was out on the streets back in May, followed by a flurry of news coverage. The months following have been absorbed with analysing submissions and planning how best we proceed. You can now download the results of the consultation, where it probably won’t surprise you that the vast majority of respondents were very keen on marine reserves in the Bay of Islands. The support shown for no-take marine reserves generally, and our proposals in particular, has strengthened our resolve to continue.

But nothing is simple – particularly when it comes to no-take marine reserves and the fixed views of some stakeholders. Here are just some of the issues:

1.    We’re sure of Government’s commitment to create a network of marine reserves around the country – but we’re concerned how small the inshore areas to be protected often are. Take the recent Kaikoura outcome as an example, where a large area of pink denotes the extent of the new Hikurangi Marine Reserve just south of Kaikoura Peninsula, but when you look more closely you’ll see that the shoreline where you or I and our mokos could snorkel a fully functioning natural ecosystem in the future amounts to a piddly few hundred metres. Here in the north we must – and can – do better!

2.    Roll-out of the Government’s Marine Protected Areas Policy could possibly address our (the Northeast Biogeographic) region next - but we don’ know exactly when. The future of our proposals for the Bay of Islands in the roll-out is also unclear, but we’ll certainly make our voice heard!

3.    And then Te Rawhiti Hapu – who hold Mana Moana over the area of our two proposed marine reserves – came out strongly against our proposition.

4.    And closer to the finishing line, we can be pretty sure commercial fishing interests will oppose us on principle, even though our proposals affect very few fishers.

It’s a daunting list of challenges, but it is also clear our community wants marine reserves in the Bay of Islands. Fish Forever is now strategically working through this list. We can’t at this time say when a marine reserve application will be made, but we continue to work towards that goal.

Meanwhile, Fish Forever continues to talk with Hapu, fishers, and with regional and central government. If you want to be part of that conversation, do get in touch with us.

Look forward to a little update like this every second month from now on. Each Fish Forever Matters will be accompanied by an interest-story from the waters of the Bay of Islands. If you've got something to contribute, please send it to Richard at This email address is being protected from spambots. You need JavaScript enabled to view it.

If it ain’t broke, why fix it?
John Booth

Some argue there’s nothing wrong with Bay of Islands’ marine ecosystems. Fishing’s fine – so why even mention marine reserves? They’re simply not necessary.

Yet we’ve now come to realise - using an entirely objective and comprehensive measure - just how broken the Bay of Islands really is. It’s broken because critical elements of the natural biodiversity have been destroyed in many areas.

A large proportion of the kelp forests that once festooned every available open-shore rocky surface, from low water to 16 metres or so, has gone. Instead, there is now a naked band from just below low tide to about 8 metres, where kina have eaten out the algae.

I found 29 pozzies in the Bay of Islands for which there was a series of aerial photographs, from the early 1960s or before, through to the present, in which the extent of seaweed cover could be clearly discerned. They included parts of the open coast outside the Bay, as well as within or close to the mouths of inlets, but with the bulk in the main basin of the Bay.

And the level of assault on the mauri of the kelp communities is scary. For most parts of the main basin of the Bay of Islands, and on many open coasts, the change in kelp cover has been monumental. Decline was obvious by the 1970s, although some forests did stagger along until quite recently. Thankfully – and in contrast - there appears to have been little change at all to the kelp cover of inner areas, such as near the mouths of the inlets where waters are too fresh for kina. And there certainly are areas of healthy kelp on rugged exposed shores, but they’re typically interspersed with kina barrens. 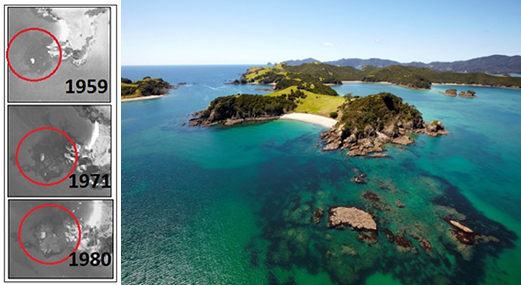 Today, the reef off Te Akeake, the northwest extremity of Urupukapuka Island, displays a fringe of kelp at low tide level, and then again from about 8 m depth. The naked area between is where the kelp has been eaten by kina, their population exploding once key predators such as large crayfish and snapper had been fished to levels too low. (Photos: NZ Aerial Mapping; Salt Air 2012)

Take snapper, for example. Bay of Islands is in the East Northland substock of the SNA 1 fishery, for which the spawning stock biomass declined abruptly from about 50 000 tonnes in 1960 to a quarter of that (and about 20% of the unfished state) by 1985, after which it has fluctuated without trend. And for rock lobsters in CRA 1, the fishable biomass collapsed from 3000 tonnes in the mid-1940s to just 750 tonnes in the early 1970s. These declines took with them the larger individuals which had, in turn, been the main predators of the kina.

Patches of healthy kelp can still be found off open shores of the Bay of Islands, but they’re under pressure from sea urchins. From left to right: the brown kelp Lessonia; agar weed Pterocladia; and seawrack Carpophyllum; with the common kelp Ecklonia deeper down. (Photos: Roger Grace)

Demolition of the shallow kelp community will have had unimaginable impacts on the marine life of the Bay of Islands. Kelps are highly productive, fixing carbon, fuelling the ecosystem and providing habitat for all manner of animals and plants.

No-take reserves typically lead to the return of fully functioning kelp ecosystems, the dependent life forms and ecological processes returned, the sea’s mauri restored - as we’ve seen in the no-take marine reserve at Leigh. Tools such as rahui, mataitai, taiapure and so on simply don’t cut the mustard because they can’t be guaranteed to retain the very high levels of harvest control necessary, and remain in place long enough, for fully functioning natural ecosystems to emerge. Top predators take decades to resume their roles, and even modest levels of fishing make recovery impossible. 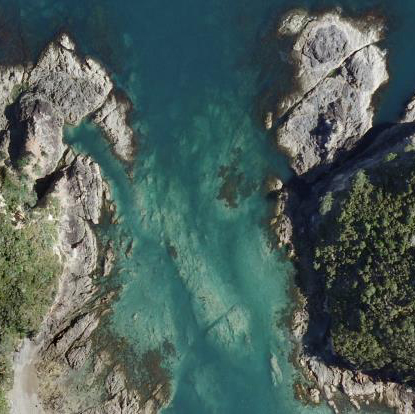 An entire generation of young divers snorkelling the shore of the idyllic anchorage of Oke Bay, including this channel between the mainland and Moturahurahu Island, probably think that a rocky seafloor bereft of kelp is natural. Such widespread annihilation of kelp forests, and loss of essential structural complexity in the reef, over several decades will have had undreamed-of impacts on the overall marine ecology of the Bay of Islands through the loss of the host of animals and other algae associated with kelp forests. (Photo: Ocean Survey 20/20)